Well, I saw it. I was given steamy shots of Chris Pratt fixing a motorcycle — very Tom of Finland — but as raptor-tamer Owen, he was as commonplace and predictable as they come. Ugh, men.

He was that one necessary character that exists in every Jurassic Park movie who bodes doom — who thinks that maybe bringing dinosaurs to life (or, in this case, splicing Jurassic DNA to invent new ones) is not such a good idea. When things go badly, as they tend to do in this franchise, Owen becomes the action hero who saves the day and kisses Bryce Dallas Howard.

The whole story takes place over the course of a day, which makes the disaster-porn of it all feel a bit absurd, awkwardly rushed, and painfully, improbably easy. You’ve seen the trailer, so you know the premise (and by extension, the movie). Jurassic World — a bigger, grander version of its original — is open and making a killing. Claire (Howard) sells corporate investment options to potential donors.

The attractions (boat rides with brontosauruses!) are awesome to imagine. There have been claims that something like this could really exist, but these have been debunked. Sorry, Universal.

Claire helpfully explains that park designers are being pushed to create bigger and better attractions to generate interest and revenue, which rings true to anyone who’s been to Disney Land. One such bigger, better attraction is a new genetically-engineered dinosaur, the “Indominus Rex,” which is a composite of the park’s most dangerous predators. Owen goes to check out the new beastie and everything goes terribly wrong.

Yes, it’s a perfectly orchestrated disaster. It’s just a little hard to believe that with billions on the line, there’s no failsafe, no kill switch, no built-in self-destruct within these critters. How did they accrue enough insurance to get this place off the ground? Why does this keep happening? 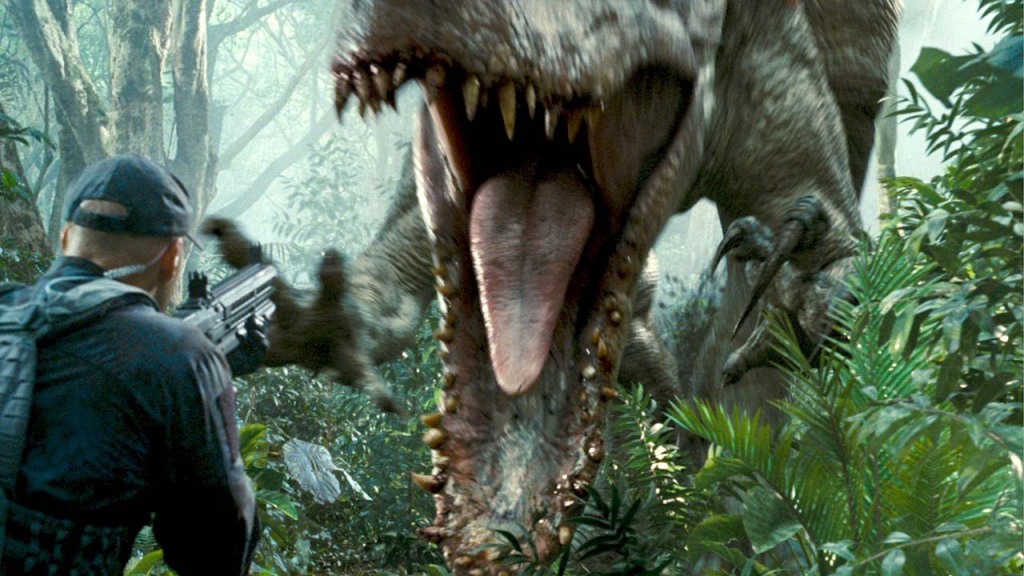 I suspect that, somewhere along the way, the filmmakers realized the film was a bit ridiculous. To keep it from degenerating by taking itself too seriously, comedy bizarrely appears midway through the film along with some out-of-place romance between Owen and Claire. Nothing says sex like the risk of being eaten.

Let’s move on to costuming. Claire wears the most indestructible white heels possible for the entire movie, even when running from a tyrannosaurus rex. Every drag queen in America has tweeted to Universal asking who makes the damn shoes.

I was hoping the storyline would be different, maybe even darker, than the original Jurassic Park formula. I was hoping to see something like a deeper discussion of Jeff Goldblum’s chaos theory played out onscreen — maybe even an elegant, action-packed debate on the ethical implications of bringing something to life, à la Frankenstein. Even better, we could have gotten a commentary on global consumerism, on our impulse to turn history into attraction, to commercialize nature even as we destroy it. But all we got was a cheap, formulaic, and decidedly less-scary offering of a retro franchise.

Don’t bother with this one.