For the uninitiated, pup play is a scene in kink in which people act like dogs — they bark, roughhouse, and play in pup mode. I consider “pup” a predominantly submissive headspace. Dominants may be other pups — called “alpha pups” — or pup “handlers.”

On Scuff a few weeks ago, I saw a handsome man on the global feed. He looked like my friend Eric, Mr. Los Angeles Leather 2014 (pictured below from his photoshoot with Eric Schwabel), but it wasn’t him — it was his doppelgänger, a handler of submissive pups. I messaged him. At first glance, our kinks seemed perfectly aligned — but after chatting, I realized we enjoyed two different versions of the pup scene.

First, let me disambiguate a common misconception. Pup play is not the same thing as bestiality — a question I’ve been asked more than once. “Bestiality” is the practice of humans having sex with animals, which is actually legal in Alabama. “Puppy play” or “pup play” is a kink practice between two humans and does not involve any actual canines. 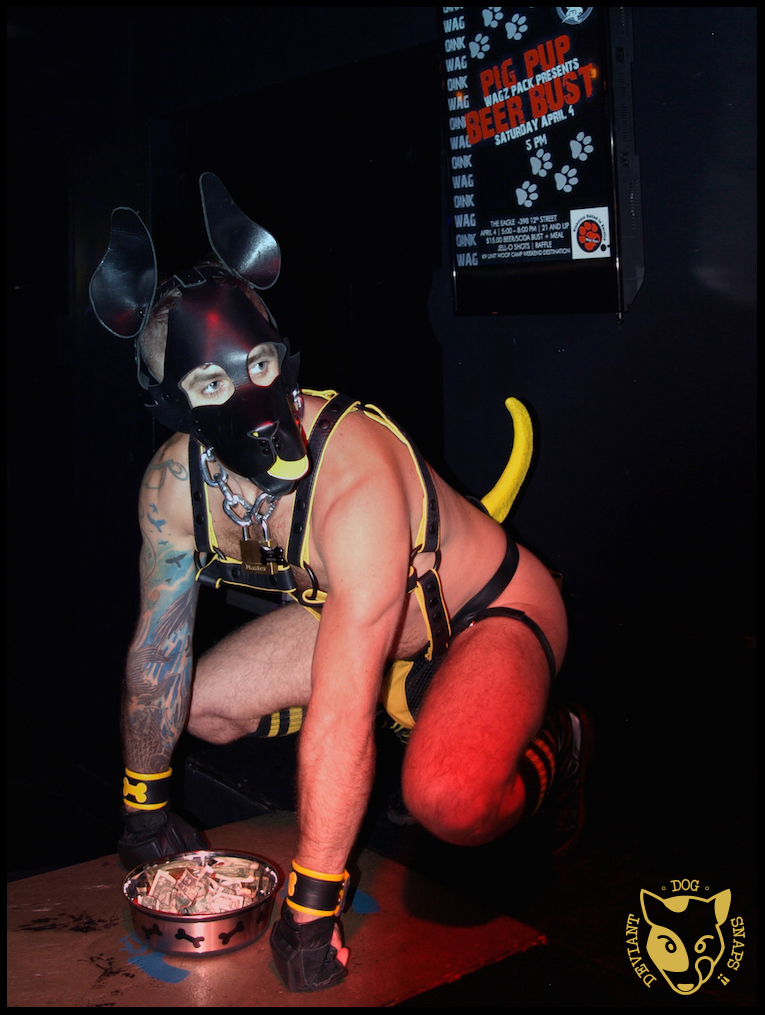 There are different kinds of pet play — kitty play, pony play, and more — and sex usually goes along with each of them. Pups enjoy roughhousing, licking, getting petted, getting “rewarded” for good behavior, and getting “punished” for playful disobedience.

The man on Scruff was into a milder version of pup play than what I’m familiar with — and If I’m honest, the word “pup” is somewhat new to me. When I first got into this scene, my sir at the time called it “dog training.” I now understand that “dog,” when applied to the context of role-play, defines a rougher, more intense BDSM scene, one which usually involves spanking, verbally abusive tops, hardcore sex, and more. That’s the version of pup play I’m into, but I also recognize that many pups and handlers, like the handsome man I chatted with, enjoy something gentler — a sweet, playful scene focused on caretaking in which the puppy headspace is considered something like therapy, not a form of degradation.

But all this is semantics and minutia between slightly different versions of the same general scene, which is itself a micro-scene in the kink community, which itself is a fringe — albeit global — populace. A reasonable question i: why do people do any of this?

It’s hard to answer that. It’s fun, usually, but I think there’s a deeper reason. I believe pet play — and kink in general — comes from something deeper and more primal in the human psyche.

Human sexual practices are more than surface detail. Someone who has allowed themselves to enjoy BDSM (bondage, domination, sadism, and masochism) has discovered a healthy outlet for their natural violent urges — a way to release and explore the impulse to hurt and be hurt. This can be very therapeutic. You leave a good kink session feeling like you’ve meditated for hours — like a weight has been lifted from your body. It’s the same sensation some people describe after intense sports — an adrenaline rush, a strange combination of fear and arousal, where you retreat into your body. Sensations are stronger, connections deeper, and pleasure maximized and expanded by pain.

Most people don’t like to admit their inner violence, but the human urge for violence is peppered throughout our culture. From sports to movies, we are surrounded by evidence that violence is fun and that we enjoy it — that we have innate urges to control, subjugate, and dehumanize others. Evidence shows that we slip into mental states of being controlled, subjugated, and dehumanized easily. These truths reveal themselves in our darkest acts of depravity: people ganging up on a gender-ambiguous person in broad daylight, prisoner torture at Abu Ghraib, and teenagers violently attacking an old man.

During one of my hardest play sessions, I suddenly felt indescribable anger at my father. I started crying. I realized that I hold a lot of pent-up anger against him that never gets released in my daily life. When the scene was over, I felt like a weight had been lifted from me. It felt like intense meditation, except with rope and leather.

I don’t believe in God, but it took me a while to call myself an atheist. I dabbled first through Buddhism and Islam, then through Pagan and mystic philosophies, before realizing religion was not for me. That trend of disbelief and questioning continued into ethics, law, culture, and the basic assumptions of human-versus-animal, right-versus-wrong, and male-versus-female that are ingrained in our society.

In the end, I believed almost nothing. Today I believe man is an animal with thumbs and a decent brain. I believe in no afterlife, no objective ethic. I believe most things we believe are “real” are actually subjective inventions. My religion became a journey of breaking down constructs to discover the animal — permitting my carnality to rise to the surface — which is partially why I enjoy really rough sex. It allows me to unleash this part of myself and explore my cravings df without shame or self-denial.

That’s the sacred heart of my kink — my connection to it that feels quasi-religious. Intense sex as religious practice has ancient precedent in the kama sutra, and nearly all pre-Christian, polytheistic faiths celebrated sex as a release of spiritual energy. They all recognized masculine and feminine energies in the world and maintained that we could connect to these energies through pleasure. While I don’t believe in anthropomorphizing nature into binary spirits, I do think there’s a grain of truth in our instinct that connecting to our base, animal selves elevates us — going lower makes us high.

The sex I love lets me growl, and it’s delivered me to a lovely community of fellow practitioners — companions in the hunt for true selves. Together, we peek beneath social norms to see the truth. I am revealed when I get on all fours.

Enjoy this post? Consider patronage on my Patreon. Patrons get personal gifts from me. Above Image: Learn more at humanpups.com